Finding Our Cool On Ometepe

It was already over 30°C outside, according to my friend A. My other friend C gave a sign of defeat. We all agreed that it felt hotter than yesterday, if that was even possible. I was starting to run out of clean clothes because in this heat, your whole outfit is immediately drenched in sweat, just from walking across the room.

It had been getting hotter and hotter over the last few weeks as the end of the dry season (April) approached. Although it had yet to rain, the humidity was at an all-time high and it felt like the rainy season could begin at any moment. But Mother Nature wasn’t quite ready yet, as the blue skies were covered with a thick haze of humidity that even the sun had a hard time penetrating.

We had just arrived on the island of Ometepe for the final leg of our 2 week backpacking journey through Nicaragua. We’d taken the ferry the night before from Granada, to this little island sitting with its twin volcanic peaks, Concepcion and Maderas, in the middle of Lake Nicaragua. We had high hopes of exploring the Rio Istian by kayak and perhaps taking a horseback ride to the San Ramon waterfalls or hiking one of the volcanoes. We only had 2 full days here and we wanted to make the most of it.

The Luna Cabin, our home during our stay.

Waking early on our first morning at a beautiful little Eco Lodge, Finca del Sol located at the base of Maderas Volcano, we took our seats at the breakfast table. We were egar to ask our wonderful host, Cristiano, about the various activities available for us to try on the island. Cristiano was a Nica himself, married to a Canadian, and the two ran this beautiful eco lodge B&B. Cristanio was always smiling with an upbeat attitude that seemed to translate into his movement as he always had a spring in his step.

Breakfast in the garden

Local residents of the eco-lodge

We had a few ideas of how we wanted to spend the day, thanks to a binder full of activities, excursions and information about the island that had been supplied in our little cabin. Having picked out our top choices, we hoped to be able to arrange them last minute through our host.

After breakfast was served and we met the other guests staying on the property with us (a couple from Germany/USA and a brother/sister duo from Vancouver), I pulled Cristiano aside and asked him if we could arrange to go kayaking down the Rio Istain. We’d heard it’s a great way to see the wildlife, especially howler monkeys, and with the heat we thought it’d be nice to spend the day on the water.

Rio Istian as we would have to liked to see it. Photo Credit: Travel Channel

“Oh it’s a wonderful way to explore the island,” said Cristiano with a smile, “but unfortunately, the river is all dried up as it’s the end of the dry season.”

Apparently the Rio Istain was now a muddy bog, rather than a river, separating the two volcanoes of Ometepe and there was no way we were going to go kayaking.

“Oh too bad, we were really looking forward to it,” I replied feeling a bit let down. No matter, there were plenty of other options.

“Well, can we go horseback riding to the San Ramon waterfall then? We’d love to go swimming under the falls since it’s so hot out,” I asked hopefully.

“Hmmmm…” thought our host out loud. “Well you could, but it’s an expensive taxi ride to the starting point and the waterfall is actually only a small trickle of water at the moment (due to the dry season) so you won’t be able to go swimming.”

The San Ramon Waterfall that we would never see. Photo Credit: Trip Advisor

Not again I thought, disappointed. It seemed that a lot of our desired activities just weren’t going to work due to the time of year. We had already thought of doing the 1 day trek to the top of Concepcion Volcano, but had heard it was quite grueling. In this heat, we’d probably end up stranded half way up with heat stroke.

Seeing my disappointment, Cristiano offered an alternative. He had already arranged for the couple who were staying at the B&B to take a guided nature walk part way up Maderas Volcano. It was to begin right after breakfast and finish by lunch time so we’d avoid hiking during the hottest part of the day. Feeling like this was the best option to do some exploring, my friends and I jumped on board and the brother/sister duo from Vancouver joined us as well.

The hike began right from our eco lodge and we started the climb the cloud covered Marderas Volcano. The trail was well worn and easy enough as we passed through freshly harvested plantain fields and pastures.

It was hot and humid but there was a nice breeze blowing across the fields to keep us cool. All too soon though, we entered the thick jungle that covers Maderas volcano and the nice breeze bid us farewell.

Now don’t get me wrong, I love being in the jungle. There are so many amazing creatures that inhabit the dense foliage and I love the feeling of being on an expedition in a lost world. But the humidity seemed to double once we entered the confines of the jungle and the only thing that distracted us from the oppressive heat was the troop of howler monkeys swinging in the tree tops above us.

Hearing the howler monkey howl will send a chill down your spine, as this deep vocal outburst can carry its sound up to 5 km’s through dense jungle. Being in the jungle with a troop of wild monkeys is a thrill no matter how many times you’ve experienced it, and it gave us a good distraction from the heat.

Moving onwards and upwards I thought maybe our guide was taking us up the actual volcano rather than a nature walk through the jungle. After about an hour we leveled off and came to a wonderful lookout that gave us an incredible view of Maderas’s twin peak, Concepcion volcano. Well, it would have been more spectacular if it hadn’t been for the thick haze of humidity and low hanging cloud, modestly shrouding Concepcion from our curious eyes. None the less, we revealed in the warm breeze the open lookout had to offer, as we tried to air out our now drenched t-shirts.

Concepcion Volcano under a haze of humidity

Making our way down the volcano proved to be just as physically taxing as it had been going up. Because it was now mid-morning, the heat and humidity was bearing down on us with a vengeance. Marching on, we were on a mission to get back to the eco lodge and find somewhere cool to wait out the day.

As we left the jungle we passed under another troop of howler monkeys who had the right idea of simply hanging out in the tree top branches. These guys were smart and knew how to spend the hottest part of the day, while I felt like we were the idiots trekking all over with temperatures reaching the high 40’s.

Just when I thought my skin might actually start melting in the intense heat, we finally we made it back to our little eco lodge. Temperatures now reaching near boiling point, my friends and I jumped in the jeep our American/German couple friends had rented, and all 7 of us took off to the only salvation we knew of: Ojo de Agua.

Ojo de Agua (meaning “The Eye of the Water) is a wonderful, beautiful (lifesaving!) natural cold water pool in the middle of the jungle. Man-made walls create a large swimming pool as the natural cold water creek passes through and pours out the other end. With lounge chairs, a restaurant, pool side vendors selling fresh pina coladas out of coconuts, we had found our salvation. Feeling like ragged explores who had been lost in the hot desert for days, only to stumble across this little lifesaving oasis, we jumped right to wonderful cold water.

We spent the whole afternoon lounging about, enjoying fresh drinks and food, floating around in the cool pools until we started to shiver. We had found our reprieve, hidden in the dense jungles of Ometepe.

These little critters were everywhere!

As we were leaving the pools at sun down (we didn’t dare leave a moment sooner), and climbed back into the jeep, we all noticed the temperature displayed on the dash board. Not actually knowing the temperature all day long we had been joking that it was +50°C outside around mid-day. Well, we were probably right. At 5 pm in the afternoon, with the sun hanging low behind Concepcion Volcano, the temperature read +34°C. And that doesn’t take into account the humidity level.

Feeling like we’d survived a trip to the sun, we returned refreshed and relaxed to our little cabin. Though we were disappointed we hadn’t been able to do the activities we had planned, our day had turned out in a wonderful way. We went to sleep having made new friends and feeling like we uncovered a few of Ometepe’s hidden gems. Travel has a way of making you let go and just roll with the punches.

Swimming In A Volcano At Laguna de Apoyo 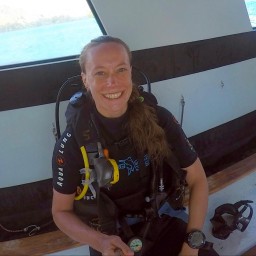